Solar flares are violent explosions on the sun that fling out high-energy charged particles, sometimes toward Earth, where they disrupt communications and endanger satellites and astronauts. These flares can also create seismic activity — sunquakes — releasing impulsive acoustic waves that penetrate deep into the sun’s interior.

While the relationship between solar flares and sunquakes is still a mystery, new findings suggest that these “acoustic transients” — and the surface ripples they generate — can tell us a lot about flares and may someday help us forecast their size and severity.

According to a report by University of California, Berkley, a team of physicists from the USA, Colombia and Australia has found that part of the acoustic energy released from a flare in 2011 emanated from about 1,000km beneath the solar surface — the photosphere — and, thus, far beneath the solar flare that triggered the quake, with the findings detailed in a recent paper published in The Astrophysical Journal Letters.

A research team from the Chinese Academy of Science’s Institute of Atmospheric Physics, joined by researchers from the Institute of Desert Meteorology, China Meteorological Administration, Urumqi, has begun carrying out a field campaign in central Taklimakan Desert, in the Xinjiang province in northwest China. The in-situ observation program, which began on Sept 24, will continue for a year.

The campaign, supported by the Key Program of the National Natural Science Foundation of China, aims to study the atmospheric boundary layer and land-air interaction over the fluctuated sandy surface in the central region of the Taklimakan Desert, and consequently provide knowledge on the atmospheric processes in the arid region, by employing both the in-situ observations and the model simulations.

The Australian Bureau of Meteorology has declared that La Niña has developed in the Pacific Ocean, upgrading from a La Niña Alert status to an active event. This, it says, means that recent changes in ocean temperatures and weather patterns over the Pacific are now likely to remain until at least the end of the year.

The bureau notes that La Niña is the cool phase of the El Niño Southern Oscillation. It is associated with cooler than average sea surface temperatures (SST) in the central and eastern tropical Pacific Ocean. La Niña events often form in autumn or winter, then decay in late summer.

The September 2020 issue is now available online! Packed full of news, interviews and features, including:

TECHNOLOGY SHOWCASE : A look at the tech innovations that were due to be showcased at Meteorological Technology World Expo 2020.

MISSION CONTROL : Meteorological Technology International meets one member of the US Air Force’s 45th Weather Squadron team, which is responsible for monitoring meteorological conditions and giving the final call on rocket launches.

SOUND BITES : Infrasound is being used to provide better stratospheric observations for weather models and to more accurately predict and track deadly tornadoes.

Continue reading In this Issue – September 2020 at Meteorological Technology International.

The World Meteorological Organization (WMO) has confirmed a temperature of -69.6°C (-93.3°F), recorded by an automatic weather station in Greenland on December 22, 1991, as the lowest ever measured in the Northern Hemisphere.

The temperature record was uncovered after nearly 30 years by “climate detectives” from the WMO Archive of Weather and Climate Extremes. It eclipses the value of -67.8°C recorded at the Russian sites of Verkhoyanksk (February 1892) and Oimekon (January 1933). The world’s lowest temperature record, of -89.2°C (-128.6°F) on July 21, 1983, is held by the high-altitude Vostok weather station in Antarctica.

A joint effort between NASA and the Qatar Foundation aims to further understanding of the effects of climate change on desert environments. To this end, researchers with the Orbiting Arid Subsurfaces and Ice Sheet Sounder (OASIS) study project are designing a satellite mission to probe the sand dunes and ice sheets of some of Earth’s driest places with radar technology similar to that used by NASA’s Mars Reconnaissance Orbiter (MRO). The project’s primary goal would be to discover and monitor underground sources of fresh water otherwise known as aquifers. 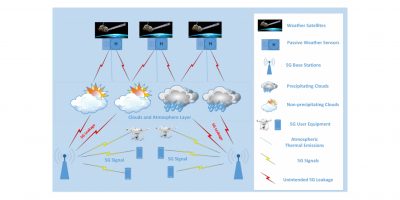 According to a study from Rutgers University in the USA, the widespread roll-out of 5G networks could present challenges for weather forecasting-related data collection systems.

“Our study – the first of its kind that quantifies the effect of 5G on weather prediction error – suggests that there is an impact on the accuracy of weather forecasts,” said senior author Narayan Mandayam, a Distinguished Professor at the Wireless Information Network Laboratory (WINLAB), who also chairs the Department of Electrical and Computer Engineering in the School of Engineering at Rutgers University–New Brunswick.

The US National Geodetic Survey (NGS), part of NOAA (the National Oceanic and Atmospheric Administration), has begun collecting aerial damage assessment images in the aftermath of Hurricane Sally.

According to the agency, imagery is being gathered in specific areas identified by NOAA in coordination with state and federal partners. Collected images are publicly available to view online via the NGS aerial imagery viewer.

NOAA notes that there are many uses for this aerial imagery, for example, in aiding safe navigation of affected waterways and assessment of damage to coastal areas caused by the storm. On this latter point, it highlights that the aerial imagery is a crucial tool for determining the extent of the damage inflicted by flooding, and for comparing baseline coastal areas to assess the damage to major ports and waterways, coastlines, critical infrastructure, and coastal communities.