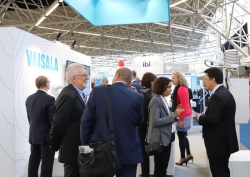 Designed to function in the harshest and most remote locations, Vaisala Autosonde AS41 is capable of operating autonomously for one month at a time, more than doubling the automation time compared with previous systems. The first deployments of the Autosonde AS41 are set to take place in Q1 2019.

“With Vaisala Autosonde AS41, national meteorological services can extend the coverage of their upper-air networks also to hard-to-reach locations,” said Jarmo Franssila, product manager for the Vaisala sounding systems.

“For 25 years, Vaisala Autosonde systems have shown how well they perform in a wide range of climates. The new AS41 system has been tested in two test sites that were purposefully selected from locations providing windy and harsh conditions.

“More than 1,000 soundings have been performed in these locations to compare and test different design details that relate to reliability of the system in general as well as performance in high wind conditions in particular.”

The FD70 Series can function as a standalone system or interoperate with third-party systems. The series is aimed at meteorological institutes and airports with the first orders set to be implemented in Q2 2019.

Tommi Linna, product manager, Vaisala, said, “[The] FD70 Series is based on innovative integration of forward scatter and optical disdrometer technologies, which enables reliable detection of even the smallest droplet. FD70 Series has superior precipitation type identification capability, and it enhances precipitation intensity and accumulation measurements. The new products provide accurate visibility measurement with proven calibration traceability and reporting range of up to 100 kilometers.”