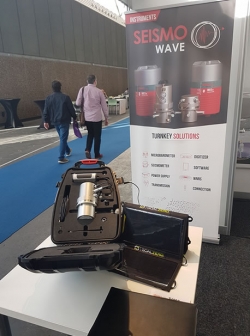 Presenting its Time 1 portable infrasound sensor, first-time exhibitor Seismo Wave is demonstrating how infrasound monitoring can be used to detect extreme weather events such as tornadoes and hurricanes.

The Time 1 setup comprises a durable backpack which has been equipped with a digital microbarometer, GPS antenna, battery and solar panel. Easy to install, its 1GB memory can retrieve three months’ worth of data at 50Hz, providing continuous and up-to-date monitoring of natural hazards.

As well as being portable, the microbarometers used in the Time 1 setup can also be deployed in conjunction with other weather monitoring sensors to form a more comprehensive weather station setup.

“We’ve been networking and forming new partnerships at the show where they would benefit from the permanent deployment of Seismo Wave’s microbarometer sensors,” said Emeline Guilbert, sales manager at Seismo Wave. “This could be as part of a weather station setup at an airport for example. For tornado monitoring however, the Time 1 is still ideal as it allows the storm chasers to get close, but not too close.”

In addition to promoting its Time 1 solution, Seismo Wave unveiled its plans to release its next-generation of infrasound monitoring equipment with the launch of Time 2 in 2019.

A slightly larger and more permanent version of the Time 1 setup, Time 2 will feature more options making it suitable for longer monitoring periods of up to two years, versus the current three-month operating period with Time 1.