Vaisala has been contracted by the Polish Institute of Meteorology and Water Management – National Research Institute to supply weather stations that improve local capabilities to tackle the effects of extreme weather such as flooding.

In partnership with OMC Envag, Vaisala will deliver more than 1,600 automatic meteorological, climatological and hydrological measurement stations to be deployed throughout the country.

Vaisala’s deliveries are scheduled for 2021-2022 and include advanced measurement technology for wind, humidity, temperature, visibility, rain and snowfall, cloud height and barometric pressure.

Jarkko Sairanen, executive vice president – weather and environment at Vaisala, said, “This new network is an important part of a Polish flood mitigation project funded by the World Bank.

The World Meteorological Organization (WMO) has published a new report examining the implications of the latest data and scientific research on the state of the global climate for sustainable development.

According to the findings, if the SDGs are to be achieved by the 2030 target, the risks posed by human-induced climate change must be understood and addressed.

The latest report from the Copernicus Marine Service has revealed evidence on how the Earth’s oceans are rapidly changing and how this is leading to rising sea levels, ocean warming, ocean acidification, ocean de-oxygenation, sea ice loss and fish migration.

Using satellite data, in-situ measurements and models, the fifth edition of the Copernicus Ocean State Report offers a comprehensive overview of the current state, natural variations and ongoing changes in both the global ocean and European regional seas. Written by more than 150 scientists from over 30 renowned European institutions, it is meant to act as a reference for the scientific community, national and international bodies, decision makers and the general public. 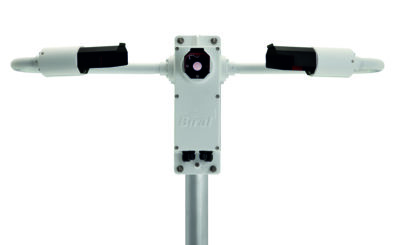 In this role, Olver will oversee the engineering team, as well as the equipment, technology and infrastructure that make up the company’s operating system. The role has a particular emphasis on the company’s electrodynamic balance research, for use with a wide range of bacterial and viral pathogens such as Covid-19.

Olver has a background in research and development (R&D), an area in which he has over 20 years of mechanical engineering and industrial R&D experience, and strong theoretical experience in physics. During his career, Olver also held the position of advanced research engineer at Dyson, where he was responsible for the research and development of key household appliance technologies.

A new report from Japan’s National Institute of Polar Research (NIPR) has discovered an important meteorological link between high waves and ice clouds in the Arctic.

Scientists analyzed data from a 2018 research expedition into the Chukchi Sea by NIPR affiliate Dr. Jun Inoue, and set about simultaneously linking oceanic structure, sea surface conditions and aerosol and cloud characteristics to emphasize the role of ‘ice-nucleating particles’ (INPs).

Inoue’s field data from the November 2018 expedition to the Chukchi Sea in the Arctic region was gathered aboard RV Mirai, a Japanese research vessel. Previous studies in the area had revealed that the sea-ice decline in the Arctic led to more frequent active weather systems, stronger wind and taller waves.

Tomorrow.io plans to launch a constellation of approximately 30 small satellites to provide high-resolution global coverage of 3D precipitation and other key parameters with hourly updates compared with the two- or three-day revisit rate of existing missions. 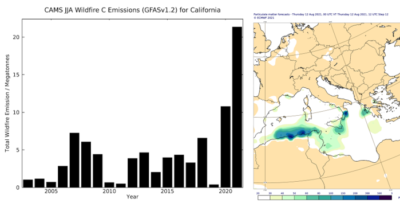 Intense wildfires across North America, Siberia and the Mediterranean basin have led to new records in the Copernicus Atmosphere Monitoring Service (CAMS) data set, with the months of July and August seeing their highest global carbon emissions respectively.

CAMS, which is implemented by the European Centre for Medium-Range Weather Forecasts (ECMWF), reports that not only large parts of the Northern Hemisphere were affected during this year’s boreal fire season, but the number of fires, their persistence and intensity were “remarkable”.

As the boreal fire season draws to a close, CAMS scientists reveal that: 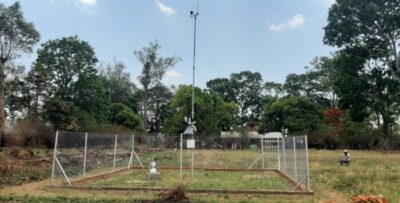 Each AWS transmits data to two different servers simultaneously. This enables each country to safely collect and analyze its own meteorological data while a central server at the SADC headquarters in Gaborone, Botswana, receives an additional set of complete data from all 10 countries for a more holistic study of the region.