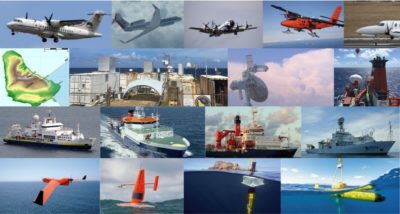 A major study has just begun in Barbados aimed at understanding the role cloud cover plays in climate change.

The European-led team will spend a month observing cloud circulation with a field operation based out of the Caribbean island.

Known as EUREC4A (Elucidating the role of clouds-circulation coupling in climate) it is the first field study to test whether changes in cloudiness act to amplify global warming. This positive feedback hypothesis, which was reached through several rounds of international climate model intercomparison studies, could have implications for Earth’s climate sensitivity. The field study will also test the validity of models that show a reduction in cloudiness increasing warming from CO2.

A new study suggests that irrigation can cancel out – or even reverse – the growing risk of heat extremes caused by human-induced climate change.

The research carried out by ETH Zurich in collaboration with other universities and the US National Center for Atmospheric Research (NCAR) was published in Nature Communications. While it was already widely known that large-scale irrigation can significantly affect local climate, this was the first time researchers had attempted to measure its impact on global warming.

A new joint US-Taiwanese satellite system is likely to significantly improve short-term weather forecasts according to newly released data from the project.

The COSMIC-2 constellation of six small satellites was sent in to orbit last June with the goal of improving forecasts of hurricanes and other major storms.

Equipped with an array of innovative sensors, the system will also provide crucial data about upper atmospheric disturbances that can impact global communications and power grids.

The University Corporation for Atmospheric Research (UCAR) – a US non-profit consortium of American universities, and one of the partners in the project – has released the first data from COSMIC-2 (Constellation Observing System for Meteorology, Ionosphere and Climate).

New research has provided further proof that greenhouse gas emissions modify how clouds form. The research, carried out by Giulia Saponaro from the Finnish Meteorological Institute (FMI), looked at the interactions between clouds and aerosols.

It is already known that naturally occurring aerosols – often sulfates, sea salt or ammonium salts – play a critical role for clouds, serving as the tiny ‘seeds’ that catalyze cloud formation.

Aerosols emitted by humans also play a role in cloud formation, producing clouds that paradoxically look brighter even though they are polluted.

US airline Delta Air Lines is developing an artificial intelligence (AI) platform that will help its crews and passengers deal with the impact of extreme weather.

The machine-learning platform, the first of its kind within the aviation industry, was announced by Delta Air Lines CEO Ed Bastian during a keynote speech at the annual Consumer Electronics Show in Las Vegas, Nevada, earlier this month.

Bastian did not provide a specific product name for the technology but said it was a proprietary tool focused on helping passengers and flight crews overcome weather occurrences that impact the routes they fly.

Scientists researching cracks in the Arctic sea ice have made a discovery about the impact these cracks have on weather.

The cracks, known as ‘leads’, form in the wintertime exposing the Arctic Ocean to the air above. Some leads are just a few meters wide; others can stretch to kilometers wide.

Because of the sharp contrast in temperature between the warm ocean and the cold air above which the sea is exposed to, the leads are known to create a flow of heat and moisture from the ocean to the atmosphere. This leads to the formation of low-level clouds over the leads.

NASA and Amazon collaborate on app to predict solar superstorms

Amazon announced that it is working with NASA on a new app that it is hoped will help better predict solar superstorms.

The joint venture is a collaboration between the space agency and Amazon Web Services (AWS) Professional Services and Machine-Learning (ML) Solutions Lab. The AWS lab is using machine-learning to spot anomalies – identified by NASA – that could be predictive of these rare solar events.

The lab’s technology is capable of examining as many as 1,000 data sets simultaneously to find patterns unique to superstorms. In a blogpost, Amazon explained the complexity of the task ahead.

Space weather is believed to be behind mysterious electrical currents detected in the ground in northern Norway recently.

The currents were picked up by sensors at the Polarlightcenter, an observatory dedicated to the study of the aurora borealis, or northern lights.

The observatory has a number of sensors to measure the electromagnetic forces that create the aurora. On January 6 these sensors detected “a sudden, strong variation in both ground currents and our local magnetic field,” said Rob Stammes, who was working at the Polarlightcenter on the night in question.

“It seemed to be some kind of shockwave,” Stammes told Spaceweather.com.