US wildfires above average intensity

Data from the Copernicus Atmosphere Monitoring Service (CAMS), implemented by the European Centre for Medium-Range Weather Forecasts on behalf of the European Commission, reveals that the wildfires currently raging across the Western USA are significantly more intense than the 2003-2019 average for the whole country and the affected states.

CAMS, which monitors daily wildfire activity worldwide using satellite observations of their intensity to estimate emissions of atmospheric pollutants, says it has tracked the long-range transport of the smoke as far as 8,000km away in Northern Europe.

The fires burning in California since mid-August, and in Oregon and Washington since the beginning of September, have emitted vast quantities of thick smoke that has affected a huge area. 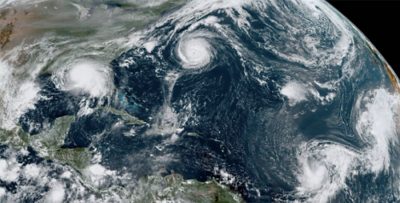 According to the World Meteorological Organization (WMO) the 2020 Atlantic hurricane season is so active that it has nearly exhausted the regular list of storm names. If this happens, the Greek alphabet will be used to name storms for only the second time on record.

On 14 September, the US National Hurricane Center issued advisories on five tropical cyclones over the Atlantic basin (Paulette, Rene, Sally, Teddy and Vicky). This announcement tied with the record for the greatest number of tropical cyclones in that basin at one time, which had been set in September 1971.

The WMO maintains a rotating list of names in alphabetical order for tropical cyclones.

Researchers at Perdue University in Lafayette, Indiana, have been using a Skyler phased array radar, supplied by Raytheon, to further their understanding of tornado activity. Most weather radar systems are of the doppler type, which have a relatively slow refresh rate, which according to the team at Perdue, means there are data gaps, which can prove problematic when trying to study the dynamic conditions present as tornadoes form. Here, Dr Robin Tanamachi, assistant professor at Perdue and member of the weather research team, discusses the advantages of harnessing this cutting edge radar technology.

The use of unconventional observations in numerical weather prediction

The UK’s Royal Meteorological Society has released a special issue of its Meteorological Applications report, which it says brings together papers discussing the need for high resolution observations and the use of opportunistic data in numerical weather prediction (NWP).

First assembled to complement the society’s ‘Big data assimilation workshop’ held in September 2019, it has now been updated to include an editorial from Dr Joanne Waller. Waller works in the Assimilation of Surface-based Observations group at the Met Office Reading Unit at the Department of Meteorology, University of Reading. She was the 2020 recipient of the L F Richardson Prize for a series of papers reporting significant advances in understanding and implementing new observation uncertainty techniques, alongside improvements in numerical weather prediction.

Continue reading The use of unconventional observations in numerical weather prediction at Meteorological Technology International.

Accounting for the chemical complexity of VOCs

A new study led by the University of Eastern Finland has found that the secondary organic aerosol (SOA) mass yields for Scots pine emissions, dominated by farnesenes (six closely related chemical compounds which are all sesquiterpenes), were observed to be lower than emissions generated from alpha-pinene (an organic compound of the terpene class) but higher than those produced by mixture of farnesenes and bisabolenes (a group of closely related natural chemical compounds which are classified as sesquiterpenes).

The composition of plant-emitted VOCs and their potential to form SOA was studied by the report’s authors using a flow reactor to generate biogenic SOA from the oxidation of Scots pine emissions.

Continue reading Accounting for the chemical complexity of VOCs at Meteorological Technology International. 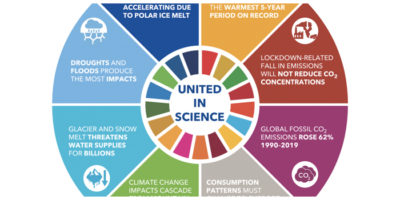 Climate change has not stopped for Covid-19. Greenhouse gas concentrations in the atmosphere are at record levels and continue to increase. Emissions are heading in the direction of pre-pandemic levels following a temporary decline caused by the lockdown and economic slowdown. According to the WMO, the world is set to see its warmest five years on record – in a trend that is likely to continue – and is not on track to meet agreed targets to keep global temperature increase well below 2°C or 1.5°C above pre-industrial levels.

These claims are based on a multi-agency report, United in Science 2020, which the WMO states highlights the increasing and irreversible impacts of climate change.

The EE260 humidity and temperature probe is the latest offering for meteorology from Austrian sensor manufacturer E+E Elektronik. The company says the sensing probe is ideal for reliable weather monitoring in road traffic applications or at airports.

According to the firm, the use of a heated sensor and probe enables precise and continuous humidity measurement, even in areas with high humidity levels. Due to its compact design, the EE260 is also compatible with many commercially available radiation shields.

Additionally, E+E notes that the fast response time of the sensor makes it useful for weather warning systems, and a sensor coating ensures corrosion resistance in harsh environments.

La Nina to persist through winter 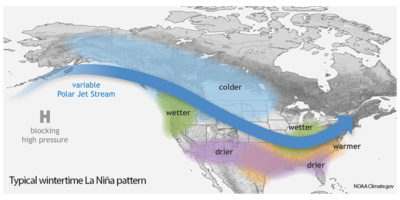 A La Nina climate pattern has developed and is likely to persist through the winter, according to an advisory issued by NOAA’s Climate Prediction Center.

“La Nina can contribute to an increase in Atlantic hurricane activity by weakening the wind shear over the Caribbean Sea and tropical Atlantic Basin, which enables storms to develop and intensify,” explained Mike Halpert, deputy director of NOAA’s Climate Prediction Center.