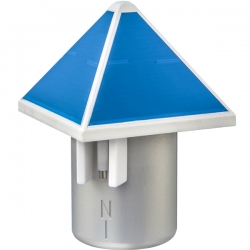 The new sensor, with an international patent, has a serial RS-485 half-duplex interface. It is primarily designed to reliably detect supercooled precipitation events and icing situations in fully automated weather stations. Because of its compact, robust housing with no moving parts, the sensor is suitable not only for meteorological weather stations but also for industrial applications such as windmill nacelles, bridges and other structures where icing could pose a problem for human or technical safety. Due to its symmetrical design, the precipitation measurement of the new sensor is independent of the wind direction. Thanks to the standardized interfaces, the sensor can be easily integrated into existing systems or operated as a standalone sensor.

Freezing precipitation is known to be an extremely dangerous weather phenomenon for aviation, transportation and energy infrastructure. Under special meteorological conditions, liquid raindrops with temperatures below freezing can reach the ground and freeze instantaneously when they hit a surface. Roads and runways, aircraft, wind turbines and power lines can be covered by a substantial layer of black ice within a very short time. To be able to take appropriate countermeasures in good time, these weather events should be detected as quickly as possible to warn infrastructure operators, pilots and the public.

For automated weather stations already using present weather sensors, combining data from existing sensors and the new sensor provides additional benefits through cross-comparison (for example, false-positive detection) and other information such as precipitation temperature and spike detection. Spike detection reveals any supercooled droplets in precipitation events that otherwise look like normal snow or sleet showers. Once supercooled droplets enter the picture, black ice can form, significantly changing the nature of the precipitation event.