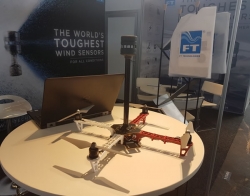 Trialled by the UK Met Office as part of its Boundary Layer research project, the newly released FT205 ultrasonic wind sensor from FT Technologies has been constructed using a graphite and nylon composite, making it extremely light and ideally suited for drones engaged in environmental monitoring.

As a result, the FT205 has been deployed by fellow exhibitors Vorasky (booth 5055) - a Korean UAV developer which signed a memorandum of understanding with FT Technologies to integrate the wind sensor with its environmental monitoring drones.

“The FT205 has been extremely popular at the show, everyone wants to know about possible drone applications,” said Heather Fitzgerald, senior digital marketing manager, FT Technologies. “The fact that it’s so light and versatile means that it can be fitted to almost any drone, providing it’s kept away from the rotors. Because of this, the sensor has been constructed so that it can be easily fitted to a pole or mounted beneath the drone using a range of universal fittings.”

Weighing only 100g (0.2 lb), the FT205 is capable of reading windspeeds up to 75m/s (168mph) and is the first in a new generation of lightweight sensors to use ultrasound to derive air speed, direction and temperature.

The compact size and shape of the FT205 make it physically very strong and resistant to vibration, shock and electrical interference. It is also water resistant and can operate at altitudes up to 4,000m (13,120ft) and at temperatures between -20°C and +70°C (-4°F to 158°F).

In the build-up to its release, the FT205 was tested by drone developer Dronetools in Andalusia, Spain, as part of a forest fire prediction project financed by AMAYA and INFOCA.

By fitting the FT205 to one of its drones, Dronetools was able to monitor the intensity and direction of the wind, helping to predict the progress of the forest fire. In this way, it was possible for the local fire service to take action in specific areas beforehand, with controlled burning to prevent the fire from advancing. With its low power requirements and light construction, the FT205 proved adept at functioning in such a difficult environment.